Just like anything, underwear has a history, and can date back to more than 7,000 years ago. Regardless of the time period, there was always something that can be referred to as underwear. Men have always needed some sort of support when it comes to their package. Enjoy the ride as we breakdown the evolution of underwear and how we got to what we know it as today. 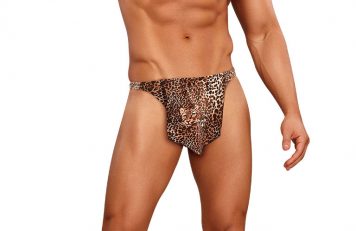 This is the first known type of underwear. It dates back to more than 7,000 years ago. Prehistoric men used to use a piece of leather or other fabric to cover their loins while they did their daily tasks. Although this didn’t offer much protection to their family jewels, it got the job done in covering up. (Although their loins were still potentially in harm’s way). For many centuries after that, not much changed, as the use of loincloths can be shown in Egyptian hieroglyphics. Pharaohs and common people alike, everyone is shown to have worn some version of the loincloth. It was also popular during the time for pharaohs to wear something similar to a kilt called a shendoh. Historians say that King Tut was found to be buried with more than 145 loincloths. Obviously, they wanted him to be well prepared!

The next evolution of underwear was the Braie. Around the 14th and 15th centuries, Braies became all the rage. A step up from the loincloth, this garment was worn by all men to protect and cover their groin area. These had more of a shape than loincloths and tended to offer more support to the groin area. Although more supportive, they were essentially a pair of loose trousers that tied at the waist, thigh, and at the ankle. These underwear styles came into serious fashion in the middle ages.

After the brai, the codpiece started to grow in popularity. The codpiece were loose-fitting trousers that tied at the waist and the shins ensuring protection from the elements. The benefit of all of this coverage, was if a man got hot during a day of work, he could easily strip down to his codpiece and still have some dignity. Eventually, codpieces introduced buttons, snaps, and laces to make it easier for men to go to the bathroom while wearing this undergarment.

While codpieces started out as just a loose fitting cloth, they evolved and the hemlines rose, they became tighter, and padding was added (yes, even back then they wanted to make sure their package looked great). It all started in the 16th century when King Henry VIII started to pad his codpiece. The codpiece started to lose its popularity around 1590.

From the period of the codpiece to the period of the boxers, men would wear a tight pair of knee-length flannel drawers under their pants and wore similar flannel shirts underneath their tops. These were popular up until the late 1800s with the introduction of the Union Suit.

Very similar to drawers, this was a head to toe “onesie” made of flannel became all the rage before boxers. These suits were comfortable and easy to wear and had front and rear buttons to allow easy access to go to the bathroom.

The first true step in the evolution of underwear we are familiar with today. The boxer was invented before the briefs, this pair of underwear was a very loose fitting piece of fabric that men would wear under their clothes. They really didn’t have much success, though, as they did not offer much support. They weren’t that popular until the younger generations saw them as an opportunity for new fashion.

The inspiration for this design was for bike riders who rode on rough, cobblestone streets. Originating in 1874, this classic design supersedes the brief by about sixty years. Supportive, comfortable and functional, the jockstrap as evolved from simply a supportive undergarment made for bicyclists to a staple in most men’s underwear drawers, not only are they worn for most sports and other activities that require extra support; fashion jocks are some of the more sought after jock styles. Whether you’re looking for function or fashion, jockstraps are here to stay and incredibly sexy.

In its final step in evolution, underwear as we know today. Starting in the 1970s designer underwear started to become all the rage, men were no longer confined to jocks, boxers or briefs in linen and cotton. They wanted prints, thongs, accents, and why shouldn’t they want to feel sexy in their underwear? Sam Baker started Male Power in 1974; he was a visionary. Male Power was offering novelty underwear, thongs, shorts, boxers, in all sorts of different prints and fabrics before it really became popular. It’s crazy to think that it all started out with a piece of fabric over a man’s loins and developed into stylish and fashionable underwear that is worn to accentuate the package and the booty. We are proud to say that Male Power has been there since the beginning of men’s fashionable underwear, and we are here to stay!

What do you think of this history of underwear, and what type of underwear was the most shocking to you? Sound off in the comments below!