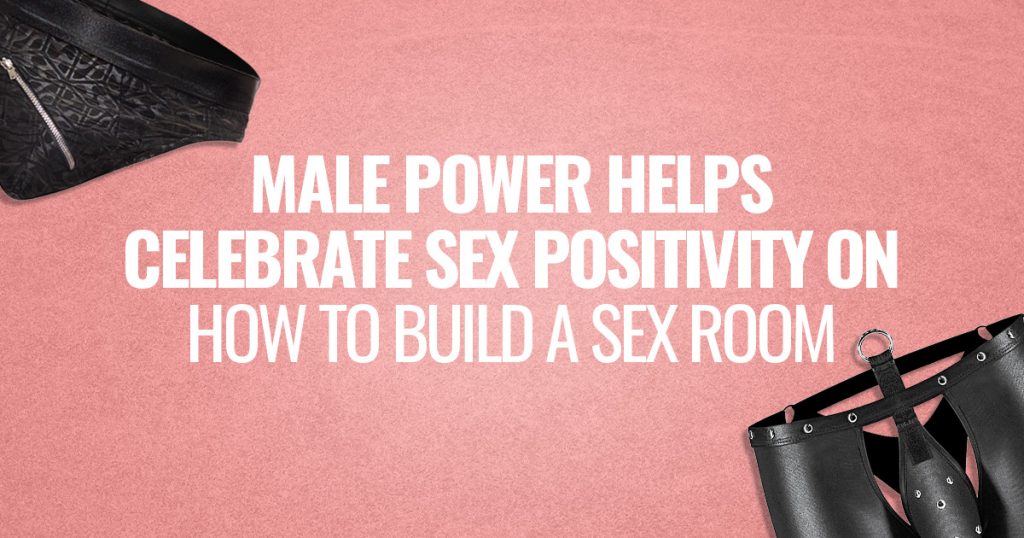 As many know, Male Power has been around for over fifty years pioneering the concept of “male lingerie”. We realized that men, just like women, want to feel sexy and empowered in their intimate wear, and strive to push that message forward. We couldn’t have been happier to be featured in Melanie Rose’s luxurious BDSM sex room design for Matthew and Orlando, a sex-positive gay long-distance couple. The Male Power team had the pleasure of speaking with Matthew and Orlando directly to learn more about their experience on the show, their opinions on sex positivity, and their feelings towards Male Power’s message and collections of men’s sexy underwear.

Matthew and Orlando met 3 years ago on the popular men-seeking-men dating app SCRUFF, and have been infatuated with each other ever since. Orlando is a former professional dancer, studying for his master’s degree in global hospitality leadership, with a research focus on diversity and inclusion within private member clubs. Matthew is a hairstylist and entrepreneur, which is what initially introduced them to the idea of being part of the Netflix Series “How To Build a Sex Room”. Being that many television production teams always need someone to do hair and makeup, Matthew has a professional relationship with popular home renovation shows, and when “How To Build a Sex Room” came across his email inbox, Matthew asked his partner Orlando if they should transform Matthew’s office den into a sex room for the two of them to enjoy, both when they’re together and when they’re apart. After that, they interviewed with the producer for the show and it was full steam ahead on the transformation of Matthew’s Denver, Colorado office den into a sex room, and the two had a blast being part of the process.

When asked about their decision for this style of the room, Matthew said:

When we asked Orlando about the style of the room, he said:

“When it comes to building a room like this, it’s important to be honest and genuine with your partner and yourself, in what makes you comfortable and makes you feel sexy. Needs, desires, and wants need to be transparently discussed with your partner.”

Matthew loves men’s lace underwear and has a few pairs of our lace men’s thongs in different colors before their experience with the show. Having Male Power underwear in the room was not only a decision by the production team with Matthew’s interest in lace but also due to the couple having a couple of Male Power pieces in their repertoire. Matthew says that wearing a men’s lace thong makes him feel sexy no matter what he’s doing, he even mentioned he was wearing our Black Stretch Lace Bong Thong earlier in the day before our interview to clean his home. He feels empowered and sexy when wearing our men’s erotic underwear, and Orlando loves seeing him in them too.

According to Matthew, men’s lace underwear and other sexy lingerie styles are often only associated with sex and foreplay, but for the couple, it’s more than that now. When wearing sexy men’s lingerie and lace underwear styles, Matthew associates the men’s underwear with power, self-empowerment, and a confidence boost that doesn’t necessarily need to end in intercourse. Male lingerie and underwear are something the couple loves to explore together as a mutual experience. Although there is the ease of shopping online, the two love to shop for sexy underwear styles in stores and perform “fashion shows” for one another, not only showing off to each other but also the others wherever they’re shopping, while also getting direct feedback from one another on what styles each likes best.

sporting a pair of them since it’s like being covered with a special unexpected surprise. Orlando also loves the price point and affordability of our men’s sexy underwear styles, mentioning that you typically don’t get that quality of underwear for the Male Power prices.

“Compared to other underwear brands out there, Male Power does a great job at fully understanding the male anatomy. All of the men’s underwear styles offered not only enhances but makes room for what you’ve got,” says Matthew when asked about his thoughts on Male Power underwear.

Being a sex-positive couple, Matthew and Orlando want everyone to understand the importance of being comfortable with yourself and your partner, and fully understanding your needs and desires both within yourself and with your partner. Celebrate self-acceptance, confidence, and feeling comfortable in your skin, which is what we also believe is incredibly important here at Male Power.

A special thank you to Orlando (@meximouse80) and Matthew (@thematthewmorris) for taking the time to speak to us, if you haven’t seen the show, take a look at Episode 3: Best Basement Ever of “How to Build a Sex Room” on Netflix.